On this city walk you will discover the most beautiful Dresden highlights such as the Frauenkirche, Semper Opera, Zwinger and much more.
easy
Distance 5.2 km
Duration1:17 h
Ascent6 m
Descent6 m
If you want to discover some of Dresden's most beautiful sights on a relaxed tour of the city of Dresden, this is the right route for you. On the 5 kilometers through Dresden's historic old town you can follow in the footsteps of August the Strong.

You start your route at the Dresden Postplatz, which is very easy to reach by bus and train. From here you have a first good panoramic view with the playhouse and the Dresden Zwinger. You enter the Zwinger through the famous Kronentor. In summer there are many orange trees. The bells at the carillon pavilion ring every quarter of an hour. On the hour they ring a little longer. Three times a day, at 10:15, 14:15 and 18:15 a bell symphony sounds for about 5 minutes. In winter, however, the sensitive bells remain silent to protect them from the weather.

Via the Wallpavillon and Nymphenbad we continue to Theaterplatz. On the steps of the equestrian statue of the Saxon King Johann you can really enjoy the view of the Semper Opera House. Passing the Italian village and the court church, you enter Brühl's Terrace via a large open staircase. The 500 meter long part of the Dresden fortress is also called the balcony of Europe. Here you can let your gaze wander over the fleet of the Sächsische Dampfschiffahrt. The large windows of the Hochschule für bildende Künste not only let a lot of light into the studios. They also give you a view of works by Dresden art students. At the end of the terrace is a small enchanted park. Time for a first break.

We leave the oldest Dresden student club, Bärenzwinger, to the left. The student club in its historical vaults is considered one of the most beautiful clubs in Dresden. Generations of students have celebrated here. The new synagogue, which was rededicated in 2001, now rises before you.

Passing the police headquarters, which looks like a castle, and crossing Pirnaischer Platz, you walk along Dresden's city hall with its 100-meter-high tower. On the top of the tower is Dresden's golden Hercules, surrounded by 16 statues of virtue. A few minutes later you are standing in front of the Kreuzkirche, Saxony's largest Protestant church and home of the famous Kreuzchor. Already in the 12th century a Romanesque basilica stood here.

Now you are standing on one of the oldest squares in Dresden. Already in 1370 the Altmarkt was mentioned. In the north it opens to the Kulturpalast. It houses some of Dresden's highlights such as the central library, the new concert hall of the Dresden Philharmonic and the Hercules' club.

The way leads you further to the Dresden Neumarkt with Luther monument and Frauenkirche. Originally built mainly with donations from citizens, it was rebuilt after its destruction from 1994 to 2005 with donations from all over the world. It goes without saying that the most important sight of the city should not be missing on your route. Take some time and enjoy the sight in one of the many surrounding cafés. A tower ascent is also worthwhile.

The next highlight is already waiting for you. The "Fürstenzug", the largest wall painting made of porcelain, shows you Dresden's royal history. More than 23,000 tiles of world-famous Meissen porcelain were processed here on the wall. Time for a photo - or two or three. The tour continues through the Georgentor, named after King Georg. One of the oldest parts of the Dresden castle is the entrance to the wonderful Schlossstraße. A look to the left into the Stallhof is definitely worthwhile. In front of us is now the Residenzschloss. Where once Saxony's rulers lived, you will find great collections such as the Green Vault, the Turkish Chamber, Giant Hall and many more.

When you reach the end, you can take a last look at the Dresden Zwinger.

all notes on protected areas

On the website of the city of Dresden you can find current information about the parking capacities in the city center.

Book recommendations for this region:

Recommended maps for this region:

Would you like to the ask the author a question?

Help others by being the first to add a review. 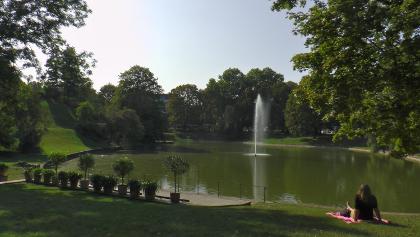 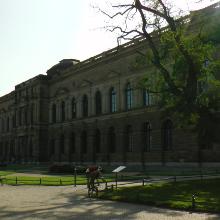 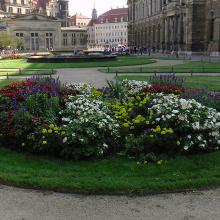 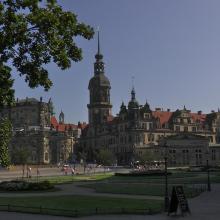